So , i think i have an addiction to sock . I crocheted my first pair of sock before christmas last year . And then i crocheted another pair by the end of the year . In the beginning of the year , i thought i’d like to try to tackle this knitted sock that i see a lot online .

I am part of this page , that has some awesome people with creativity . One of them was busy knitting socks , and that’s how i got interested in knitting sock . I am a newbie with knitting since i just learned couple of months ago . So the thought of knitting socks can be a little far fetched . I in fact , was told , by this lady who worked at Joanne . I had a question back then and another lady sent me to this particular lady by the cutting area because she is the one who supposed to know about needle arts .

There i was asking a stupid question actually , a question that i supposed to know anyway . But with how excited i was with the thought of getting started on my knitted sock , i just asked . What size of needle is best for making knitted sock ?

She said it depends on the yarn , the information is at the back of the label and i should be able to see whether it’s size 1 or 2 or even 3 . On my hand was size 3 that time . And i was like duh .. i knew this .. why did i even ask anyway . I crochet and i should know in each label that yarn has , it includes the information if you crochet or if you knit , what size of hook or needle you will need . Why did i even ask ?

But then she continued asking , are you new to knitting ? I said yes , i just started to learn to knit a month ago . My husband added , she’s been crochetting a while , just started to knit , and wants to make sock .

The lady at the cutting area , said ” Oh you just learned , i wouldn’t try to knit a sock if i were you , it’s hard and complicated ”

I did not expect that at all .. her words were so discouraging . And i wasn’t like that , even though i hear a lot of words about how complicated socks are , crochet or knit , nobody really said that directly to me . I was surprised – in a bad way .

I was very dissapointed with how this lady reacted . She works at the craft store , and i expect people would be more encouraging rather than .. oh don’t do it , it’s too hard , you wouldn’t be able to do it . Why couldn’t she just say .. that’s great , it’s a bit complicated but i am sure you can do it .

And i know people can do it , there are so many resources nowadays if you want to learn something , or if you belong to a group , which i do , you can ask for help from these people who are more experienced than you .

So fast forward a week later , i started my first knitted sock . I was pretty successful , though i picked the wrong needle for it . It was a little too big , so i made 3 socks , the first one was a no go because it’s too big , it fits my husband’s foot though . 2nd sock and 3rd sock , eventually became a pair , and it was made from worsted weight yarn . Which is just for a practice , before i am using the real sock yarn . Since that was a success ..

This past weekend , i picked up my sock yarn , which i have a lot .. i have bought so many sock yarn for someone that just crochet yarn few weeks ago . I have plenty to choose

These are my little stash of sock yarn .Sock yarn are pretty and they’re expensive compared to regular worsted weight , not to mention if you get it from Local  Yarn Store , it is def costs more money than regular chain craft store .

So my choice was the sock yarn up front on the left side . I bought this from LYS closed to my home , this particular LYS , has a lot of collection of sock yarn , which i like of course 🙂

That first day i started to knit the sock , it took me forever ! 2 hours and i only got 1 inch of the cuff done . And i was supposed to make 5 inches long cuff . I though .. this might take a month to finish LOL 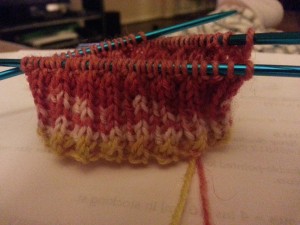 The next day i finished the cuff , and started to make the heel flap 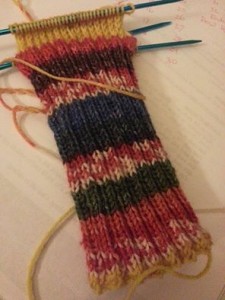 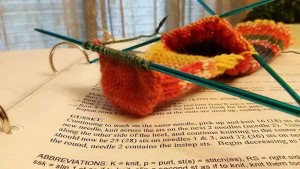 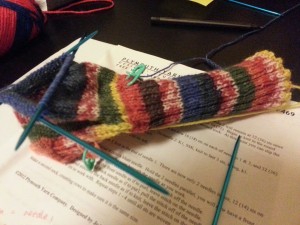 I have to say , sock takes a long time to knit , it’s because the sock yarn is very fine and very thin compared to worsted weight yarn , and plus you have to use small needles too . So it takes a while , and it is def a labor of love !!!